Until recently, the fundamental cause of corrosion and pinhole leaks in water-based fire sprinkler systems was not well understood. As such, there were many misconceptions about what causes fire sprinkler pipe to fail, ultimately leading to costly pipe replacement.

One of the most prominent myths regarding corrosion was that fire sprinkler pipe was materially defective — this myth took many different forms and would range from a focus on pipe that was manufactured overseas to a focus on the recycled steel content of the pipe.

There are several reasons why the fire protection industry began to think that there was a material problem with fire sprinkler piping. In many cases during the corrosion monitoring process, what was mistaken for material defection could actually be attributed to a type of oxygen corrosion called Weld Seam Corrosion, also referred to as Knife Cut Corrosion.

The potential for this type of oxygen corrosion is created when pipe is electric-resistance-welded during the manufacturing process. The extreme heat used to weld metal creates a Heat Affected Zone (HAZ) which materially changes the structure of the metal grains. This HAZ is only created in the areas immediately adjacent to the weld seam. If the pipe is not heat treated and all the grains of metal are not normalized the HAZ will create an area in the pipe that will corrode preferentially. 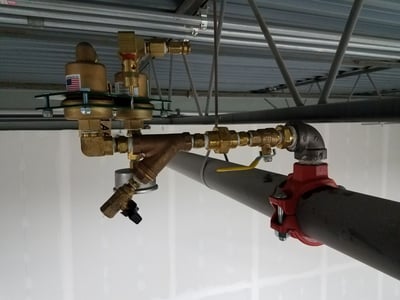 As the fire protection industry continues to become aware of the root cause of corrosion in wet, dry and preaction fire sprinkler systems, the myth of materially defective fire sprinkler pipe will begin to fade away and the focus can be placed on implementing solutions that will prevent fire
sprinkler system leaks.

How to Control Weld Seam Corrosion

Controlling Weld Seam Corrosion requires limiting the amount of free oxygen introduced into the pipe network via atmosphere. For wet systems this can be accomplished by placing an air vent on the system to provide a means of escape for trapped air as the system is being filled with water.

For dry and preaction fire sprinkler systems, replacing the traditional air compressor with a nitrogen generator and adding an oxygen removal vent will allow the pipe network to be purged of oxygen gas.

For a more comprehensive look at Weld Seam Corrosion examples and management techniques, download our in-depth white paper below.