Historically, data centers installed double interlock preaction fire sprinkler systems to protect the data halls. With dry pipe systems, the piping was not filled with water that could leak onto the equipment if there were an accident and, when compared to standard dry pipe systems, double interlock pre-action systems provide a level of safety that requires the activation of multiple sensors before water fills the piping.

As the data centers built during the early 2000s began to age, the galvanized piping began to experience corrosion related leaks.

Background Information on the Project

This particular data center was located in St. Louis, close to the headquarters of ECS.  All data centers are “mission critical,” but the data centers that serve the large Wall Street brokerage houses are particularly sensitive to outages.

One of the first leaks that occurred in the data center was on a 20 foot section of 3 inch schedule 10 main piping that was just over a bank of Cisco servers. After the second leak, the fire sprinkler contractor that was making the repairs recommended that ECS come to meet with the owner of the data center to investigate the problem.

At the time, ECS had published several articles regarding the acute vulnerability of galvanized steel to oxygen corrosion and the fire protection industry was beginning to take notice of the nitrogen solution that ECS was deploying. In 2011 there were less than five (5) data centers who had installed nitrogen generators to prevent corrosion.

Assessment of the Corrosion Damaged Piping

ECS first performed a Corrosion Assessment study on sections of the fire sprinkler piping where corrosion related leaks had occurred. In addition to actual video footage of the internal piping, pipe samples were collected from the system so that physical inspection of corrosion damaged piping could be performed. By inspecting the metal loss along with a complete understanding of the environment of exposure within the piping, it is possible to determine the root cause for the corrosion that was occurring. Videoscoping of the system piping was done after-hours on a weekend when the data center was not under the load of trading on Wall Street during the week.

All of the physical evidence from the system indicated that oxygen corrosion of the galvanized steel piping was occurring within the piping wherever trapped pools of water had collected. Pools of trapped water most often occur within the main lines.  Branch lines are pitched to prevent accumulations of water.

The video footage from inside the piping showed very clear evidence that oxygen corrosion was causing the galvanized (zinc) layer to dissolve and complete penetration was occurring at anomalies within the zinc coating. Video from the new sections of piping installed when the first leaks were repaired had already begun to exhibit attack of the galvanized (zinc) coating.  The video clearly showed that the original piping was badly damaged with numerous black and orange tubercules.

Installation of the ECS Nitrogen Generator for Corrosion Control The ECS corrosion management system for double interlock preaction fire sprinkler systems utilizes the patented “fill and purge” breathing method that facilitates complete removal of the oxygen gas from the system piping. A patented purge vent that is installed on the riser is used to exhaust all of the oxygen gas from the system piping so that it cannot react with the galvanized steel piping in the corrosion reaction. After all of the oxygen is removed, the nitrogen generator maintains system pressure with 98% nitrogen gas.

The ECS system was installed during the 1st quarter of 2011 — since then, the system still has not experienced any new corrosion related leaks on the piping.

For more details and results, download the full case study below. 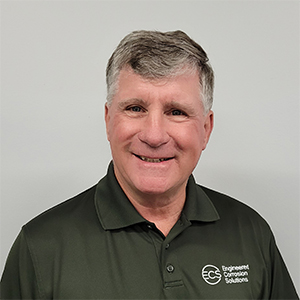