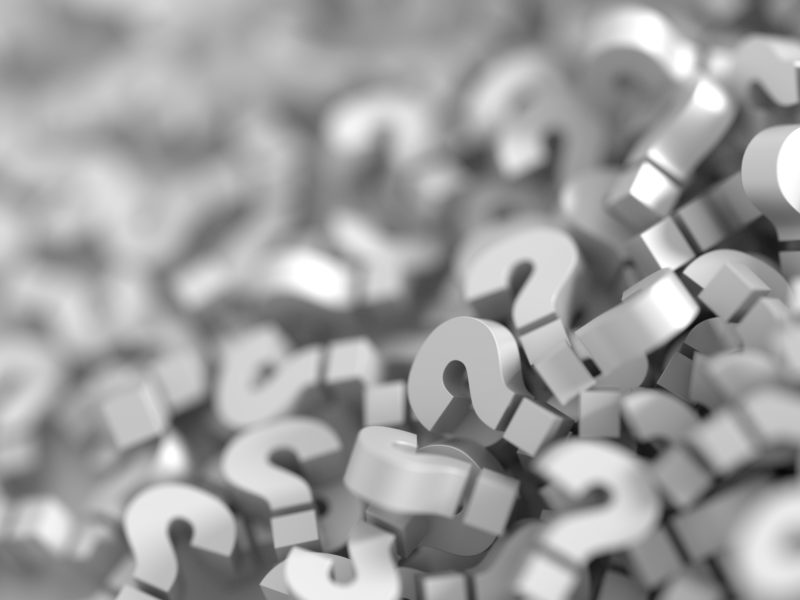 Unfortunately, many building owners and property managers do not realize they have a corrosion problem until they have a leak. And by the time they notice the problem, it’s likely that their fire sprinkler system has already suffered significant damage. This can lead to any one or more of the following problems: 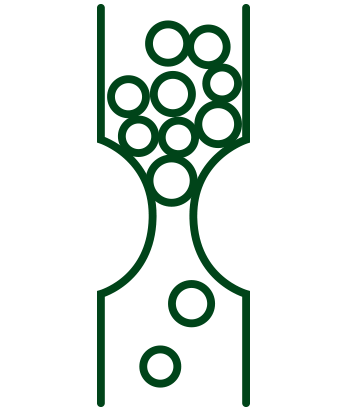 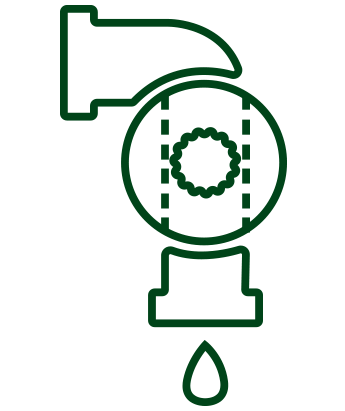 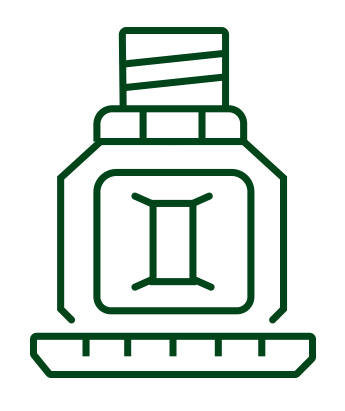 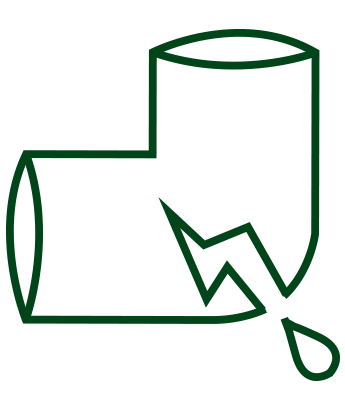 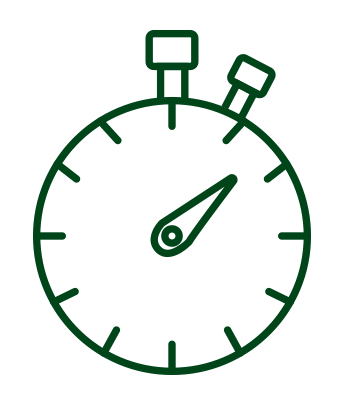 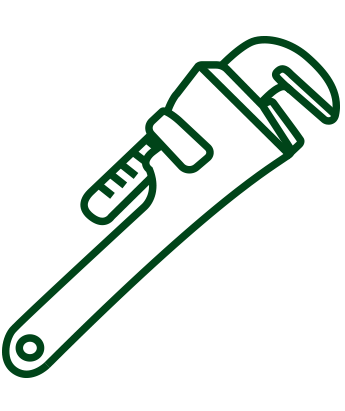 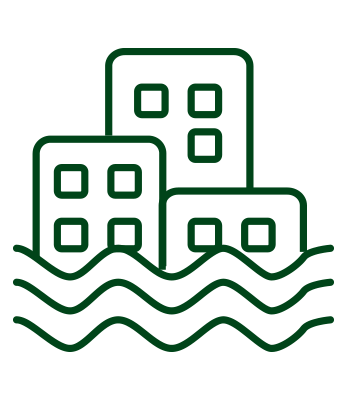 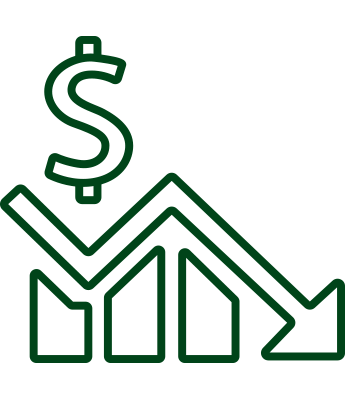 This location in each system where air meets water is called the air/water interface. As oxygen in the air dissolves into the water it immediately reacts with the first steel it contacts to form iron oxide. The air/water interface represents the most active corrosion site within these systems. At fluid-packed points within the piping system that are more removed from the trapped air, corrosion rates will be quite low.

Given the great variance of corrosion rates in fire sprinkler systems, we recommend developing a proactive strategy for corrosion monitoring systems to address the unknown condition inside system piping.

Don't wait. Set up your own corrosion monitoring plan

As a contractor, you know how important it is to review the governing standards for the industry to help you determine the next steps to take. However, because updating these standards can be a drawn-out development process, there is a growing divide between the current standards and the best practices used today.

Here is an overview of some current standards covering corrosion testing and investigation in the fire sprinkler industry.

NFPA 25 is typically the first resource for a fire sprinkler contractor when trying to find guidance on what testing should be performed on a fire sprinkler system. It covers two primary investigations that can help in determining the effects of corrosion: the Assessment of Internal Condition of Piping and the Obstruction Investigation.

NFPA 13 covers the requirements for the installation of new sprinkler systems and provides some testing requirements for corrosion. Specifically, Sections 24.1.5.1 and 24.1.5.2 require that source waters be evaluated for conditions that could lead to Microbiologically Influenced Corrosion (MIC) and other unusual corrosive properties.

Based on our experience, we've found that some of these testing methods are more effective and beneficial than others. Here are three common problems we run into:

We recommend using Pipe Failure Analyses and a comprehensive Corrosion Assessment to accurately determine the best course of action. The hard data gathered from these two exercises allows us to determine both the location and severity of corrosion within the system, as well as obstruction potential. The building owner/service contractor can then use this data to make informed decisions on mitigating these risks.

When we first entered the fire sprinkler industry, we immediately began testing to question some of the basic practices in place, from the effectiveness of using galvanized pipe to prevent internal corrosion to the role of Microbiologically Influenced Corrosion (MIC).

We continue to apply that desire for knowledge in our Analytical Services. Here are a few of the solutions you can use to detect and monitor corrosion and help prevent it in the future.

Our services can be divided into two main categories:

Utilizing a video scope and review of the system design, we determine the location and severity of corrosion within a fire sprinkler system. This testing includes pipe failure analyses to gather the hard data needed to quantify the cause and severity of the damage.

Using a combination of pipe sample, deposit, and water testing, we determine the most likely cause of the failure.

By examining the fire sprinkler system design and installation method, our comprehensive Corrosion Assessment helps us determine the cause of the corrosion and how widespread corrosion is in the system. We use these assessments to provide recommendations for preventing further corrosion, and provide information on eliminating leak risk from already damaged systems through corrective action.

Based on past projects, we typically perform assessments for three primary reasons:

Leaks have become a nuisance

Building owners are considering pipe replacement, but they need hard data to determine what pipe should be replaced and what can be salvaged.

Leaks are directly interrupting business operations in a facility

The building owner, service contractor, or insurance representative want to gather hard data to quantify the risk of future leaks developing so corrective action can be taken.

A building is being acquired or sold

The interested party in the sale wants to ensure that the fire sprinkler system will not contribute to unexpected repair/replacement costs in the future.

Here’s what a typical ECS Corrosion Assessment looks like:

Every assessment begins by gathering as much data as possible on the system to help in determining specific vulnerabilities to corrosion. This process includes review of building design and construction documents (as-builts, specifications, material submittals), discussions with the fire sprinkler contractor and facilities personnel, and review of any previous investigative work.

Using a video scope to assess the interior conditions of the fire sprinkler system piping allows for in-situ observation of trapped water/air, evidence of solids accumulations within the piping, and visual evidence of corrosion damage.  We then use this information to recommend locations for pipe replacement and/or flushing.

Factors that accelerate metal loss in the piping

Based on the review of the system design, layout, leak history, and onsite observations, we identify any factors that may influence corrosion rates in these specific fire sprinkler systems.

Our recommendations in the report are always aimed at minimizing the risk of future leaks in the system and ensuring that the system operates as designed in the event of a fire.

Regardless of the reason you’re concerned about the condition of your fire sprinkler system, the only way to make informed decisions on how to mitigate risk is by collecting hard data from the system. From there, your facility can implement a comprehensive corrosion monitoring and control strategy.
Get A Corrosion Assessment
Let us do the dirty work for you.

Once leaks have begun to develop within a fire sprinkler system, the building owner or their service contractor need to know what’s causing these leaks to develop. What corrective action can be taken to prevent future corrosion?

Via a thorough Pipe Failure Analysis, our experts can tell you.

For a typical pipe sample analysis, the building owner or contractor sends ECS a section of the pipe containing the failure. The sample is sectioned and media blasted to remove any adherent deposits, allowing for close inspection of the metal loss that has occurred.

Review of the metal loss morphology indicates the types of corrosion mechanism at work, while wall thickness and pit depth measurements help to quantify the severity of the metal loss. For more complex samples, water and deposit samples may also be taken to determine what additional factors may be influencing corrosion.

Interested in testing a section of your own pipe? Submit a pipe sample now: 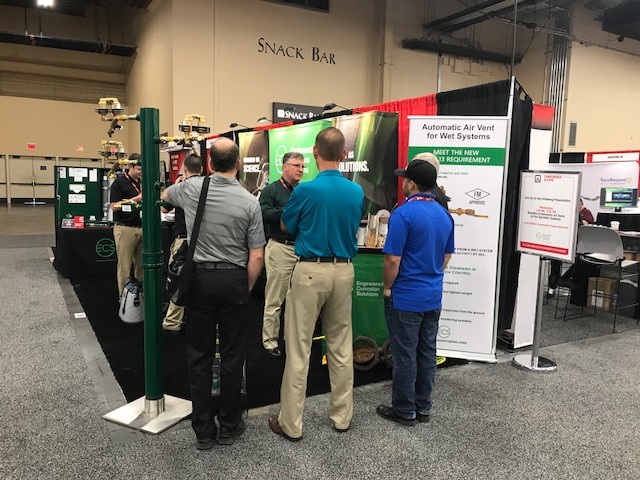 Submit a Pipe Sample
Our team of corrosion experts is standing by.

The ECS In-Line Corrosion Detector (ILD) represents the best option available in the industry to monitor internal corrosion activity in fire sprinkler systems. The ILD is a continuous real-time electronic monitoring device. Designed to be used on new or existing systems, this device simply installs where corrosion is most likely to occur. 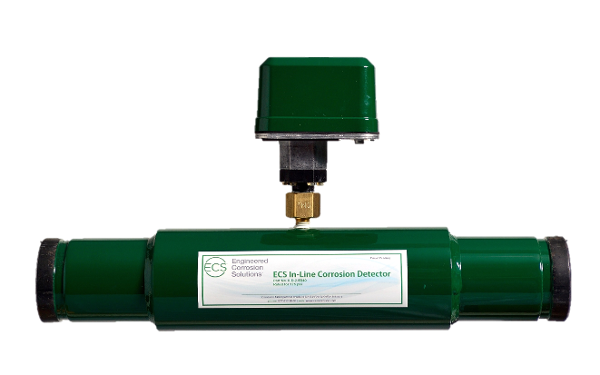 The ILD is designed with a double wall detection chamber:

The thickness of the inner wall detection surface is machined to match the pipe diameter and schedule of the system the device is monitoring. The annular space between the inner and outer wall enables the device to monitor the integrity of the detection surface. This setup allows the end user to forget about those annoying coupons seen in a traditional riser-mounted corrosion monitoring station (more information below).

When using a nitrogen generator on a dry or preaction fire sprinkler system, use a gas analyzer to verify that the system is delivering the proper purity of supervisory nitrogen gas. ECS offers two gas analyzers to ensure the purity of nitrogen being supplied meets the 98%+ target. 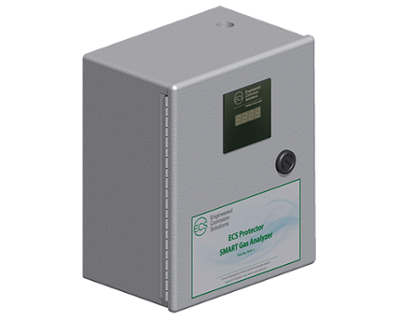 Notifies the user if the nitrogen generator feeding the system performs outside specifications. Can be monitored by the BMS or fire alarm system to provide early warning if the nitrogen concentration drops below the desired level.

For use in dry or preaction fire sprinkler systems only. 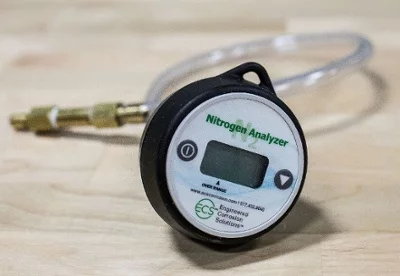 A versatile, mobile and cost-effective way of measuring gas composition inside your fire sprinkler system or at the nitrogen generator.

Can be used for both dry and wet pipe applications.

One of the most common corrosion monitoring methods is the use of corrosion coupons. In this technique, pre-weighed samples of the subject metal are inserted into the corrosive environment and exposed for a measured period of time. The weight loss relative to the initial weight is used to determine the level of corrosion activity.

Because the installation of coupons within the system piping can create an obstruction to the flow of water, most corrosion monitoring stations have been installed at the riser to mimic the conditions within the fire sprinkler system piping

This approach has several significant limitations:

Detecting and monitoring corrosion in fire sprinkler systems is important to extend the service life of the systems and ensure proper operation in the event of a fire. In all environments – but especially mission-critical environments – an early warning for corrosive activity to help identify risks provides building owners and property managers crucial information to make proactive decisions before reactive remediation becomes necessary.

Detecting and monitoring corrosion mitigates safety, structural, and piping risk to protect building and property owners against potential losses and disruptions to business continuity. So save yourself time, money, and headaches. Contact our team of experts today for a custom corrosion monitoring solution for your property.