Building owners are often put in the difficult situation of trying to figure out how to address a leaking fire sprinkler system. In years past, the most common approach was to simply fix leaks as they occurred, resulting in significant recurring repair costs. Eventually the leaks become so frequent and expensive that the building owner opts to replace the entire system and start from scratch.

However, without addressing the root cause of the corrosion that has led to the initial leaks, the new system will also eventually suffer the same fate. ECS has helped many building owners develop a corrosion management plan to help break this cycle of leak repair and system replacement.

These three activities are designed to gather hard data to quantify the severity of corrosion in the system and what actions need to be taken to mitigate current corrosion risk and prevent additional metal loss going forward.

Unfortunately, the first sign that a fire sprinkler system is experiencing internal corrosion is often the development of a leak. While NFPA 25 requires that internal inspections of fire sprinkler systems be performed every five years, the highly localized nature of corrosion in these systems means that it can often be overlooked, giving both the fire sprinkler contractor and building owner a false sense of security.

The two below images highlight how important the selection of inspection points can be.

In the left image the pipe is in near perfect condition, while in the right image significant corrosion has occurred. These images were taken from the same branch line, only 41 feet apart from each other. After performing hundreds of onsite inspections of fire sprinkler piping, ECS has developed some general guidelines on where to perform internal inspection to gather the most beneficial data.

Corrosion in wet pipe systems is typically most severe at system high points, where trapped air migrates and is compressed as the system is filled with water. Corrosion initiates along the air/water interface, resulting in metal loss on the pipe wall and the formation of iron oxide deposits. Oxygen in the trapped air continues to dissolve into the water and react with the iron in the pipe wall until all the oxygen is consumed.

Every time the wet system is drained additional oxygen is reintroduced into the piping network and the corrosion process continues again. Eventually, a leak will occur either at the air/water interface or on the bottom of the pipe underneath adherent deposits. Inspection of the wet systems should focus on the high points of the system, typically the branch lines. Systems installed in a building with a pitched roof are especially susceptible to highly localized corrosion.

In contrast to wet systems, corrosion in dry systems is typically most severe at low points where trapped water is present. Liquid water must be present for oxygen corrosion to occur. The source of this water can be from initial hydrostatic testing, periodic trip testing, or condensed water from the air compressor providing pressure maintenance to the system. 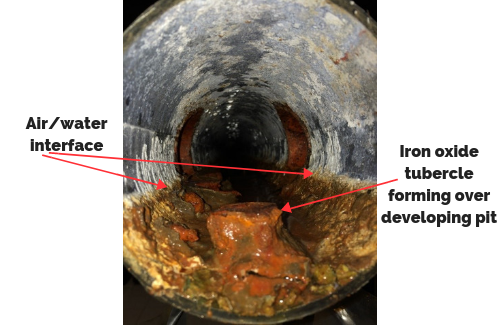 If an air compressor is used to maintain system pressure, oxygen will exist in over-abundance and corrosion will continually occur, eventually resulting in a leak on the bottom of the pipe underneath the pool of trapped water.

Once the locations with the most severe corrosion have been identified in a system, analysis of a pipe sample from these locations can determine the root cause of the corrosion as well as the severity of the metal loss. This data is used in determining what corrective action should be taken to mitigate leak risk.

Unfortunately, there is no way to reverse the damage caused by corrosion once it has occurred, other than to replace pipe. However, the localized nature of corrosion in fire sprinkler systems means that complete system replacement is rarely needed. On systems that have been experiencing leaks, ECS has found that typically only 20-25% of the system piping has experienced severe corrosion.

Performing surgical replacement of only the most damaged piping can dramatically extend the life of the system at a fraction of the cost of complete system replacement. Ultimately, several variables must be evaluated to determine if any pipe should be replaced, and if so, how much:

The primary cause of leaks in fire sprinkler systems is oxygen corrosion. ECS has developed and refined its approach to combating oxygen corrosion in both wet and dry fire sprinkler systems over the last 10 years. Regardless of the type of system, the approach is always to remove as much oxygen from the system piping as possible before it has a chance to cause corrosion, then prevent reintroduction of oxygen into the system piping.

In wet systems there are two primary methods to address oxygen corrosion.

Addressing the concern of corrosion, NFPA has included a requirement to incorporate a means of venting trapped air from wet systems in the 2016 Edition of NFPA 13 governing the design and installation of new fire sprinkler systems. While any trapped air, and the oxygen it contains, that is vented from a wet system reduces the amount of corrosion that will occur, the effectiveness of this approach is heavily dependent on the layout of the installed system.

A system with multiple high points may require the installation of numerous air vents to adequately control corrosion, especially on an existing system that has already experienced corrosion. To address these types of systems, ECS developed the WPNI process to completely remove all the oxygen from the system piping. This process uses nitrogen gas to displace the air in the system piping prior to filling with water. Once the system is charged with water, any gas that remains in the system piping is at least 98% nitrogen and non-corrosive.

A similar process is at the heart of Dry Pipe Nitrogen Inerting (DPNI). Rather than use an air compressor to maintain supervisory pressure, a nitrogen generator is used to maintain system pressure with high purity nitrogen. Combined with the installation of an oxygen removal vent and ECS’s patented fill and purge process, the use of a nitrogen generator on a dry system ensures that oxygen is removed from the system and its reintroduction is kept to a minimum.

The implementation of a nitrogen-based corrosion control strategy, even on an existing system that has experienced corrosion, can dramatically extend the useful service life of the system. If the full corrosion management plan is adopted and damaged pipe is identified and replaced first, the resulting system life will be even further extended, often beyond the expected life of the building.

Our team of experts is here to help you implement the best corrosion management plan. Contact us today to receive a custom quote for your project: