The use of galvanized steel as a corrosion control strategy has been commonplace in the fire sprinkler industry over the past 20 years. Nearly all mission-critical installations utilized galvanized pipe in their pre-action and dry pipe fire sprinkler system installations in the belief that decreased leak risk outweighed the added cost. However, upon entering the industry, ECS quickly identified the poor performance of galvanized steel piping as a corrosion control strategy and has been educating the industry on alternatives that use nitrogen instead. Despite this, it is still common to run into project specifications requiring galvanized steel piping.

The Science Behind Galvanized Steel Pipe

The galvanizing process involves the application of a thin layer of metallic zinc onto steel components. Galvanized steel can act to prevent corrosion in two primary ways. First, when attached to steel, it acts as a sacrificial anode, corroding preferentially when exposed to corrosive environments. Secondly, when exposed to moisture, the zinc will react with oxygen and carbon dioxide in the surrounding environment to form a protective layer of zinc carbonate as it dries. This protective layer is quite pervasive and will prevent water from contacting the underlying metal, thereby preventing corrosion from occurring.

Unfortunately, there are unique characteristics to the internal environment of dry and pre-action fire sprinkler systems that significantly impair the corrosion prevention characteristics of galvanized steel piping.

After installation, all fire sprinkler systems are required to be hydrostatically tested to ensure system integrity. While there are pitching requirements for both dry and pre-action systems, it is virtually impossible to remove all the residual moisture. System pressure is then often maintained with air compressors, which inject warm moisture saturated air. The result is that the internal environment of the closed piping network can be considered persistently moist, with pools of trapped water on the bottom of the pipe and completely saturated compressed air in the rest of the pipe.

This moisture, combined with oxygen in the pressure maintenance gas, will result in corrosion of the zinc layer of the galvanized steel. Unlike exterior installations, this zinc hydroxide will not be able to dry out and form a protective zinc carbonate passivating layer. As additional oxygen is introduced into the system, this zinc layer will corrode until it is breached, exposing the underlying steel.

For minor initial breaches, the surrounding zinc may continue to corrode preferentially, protecting the underlying steel. Once the zinc coating breach becomes large enough, or if deposits settle on top of the exposed steel, the galvanic protection is lost, and the steel will begin to corrode, forming iron oxide and hydroxide deposits. Under-deposit corrosion mechanisms will further accelerate the metal loss, resulting in the steel substrate pitting and forming an iron oxide tubercle. This self-catalyzing process results in highly localized metal loss and rapid leaks while leaving the surrounding metal intact. 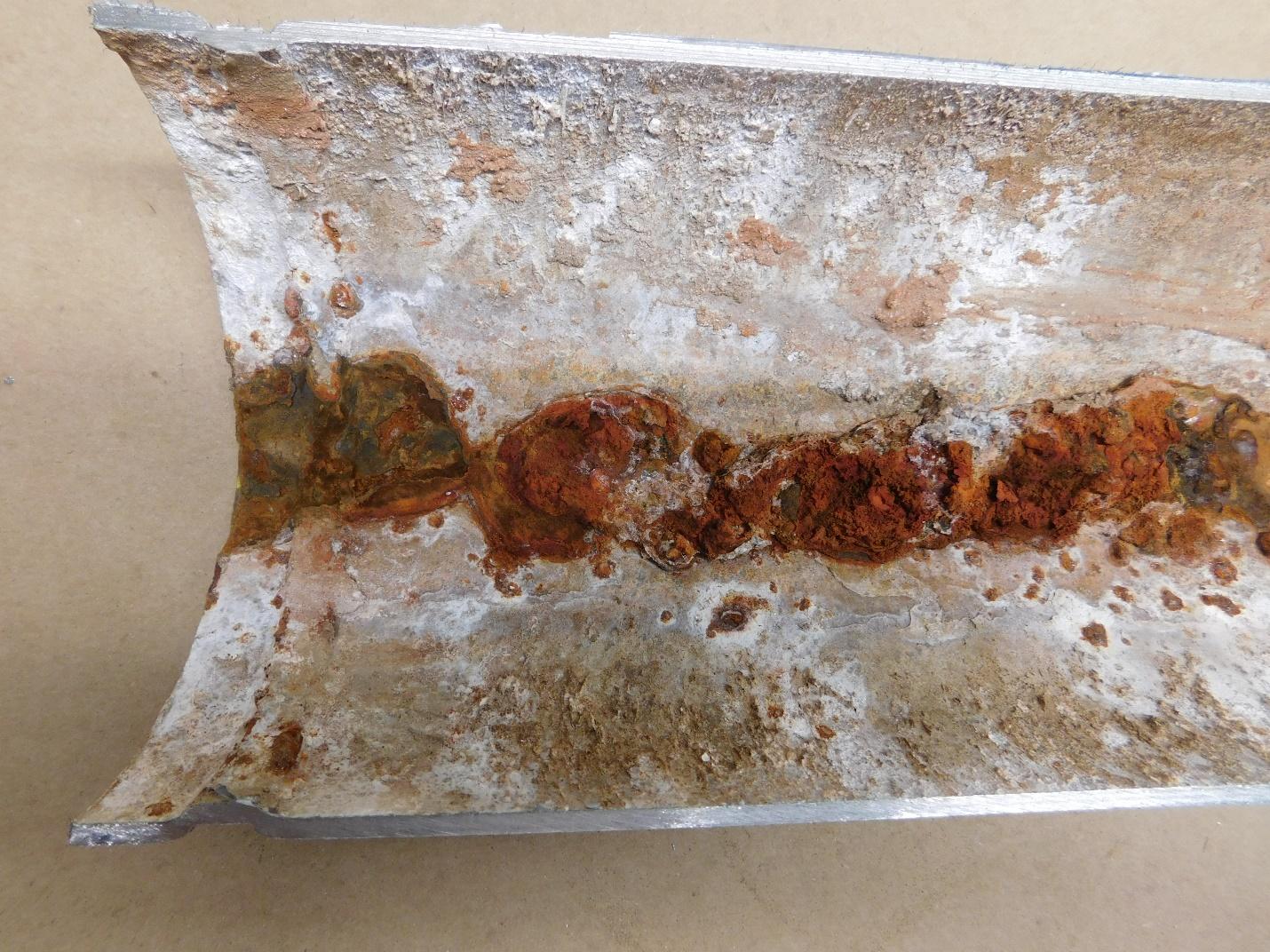 Bottom of 6-year-old 4” galvanized main – White zinc oxide deposits forming on the sidewall of the sample as the zinc coating corrodes, with iron oxide tubercles forming on the bottom of the pipe where the coating was breached, exposing the underlying steel. 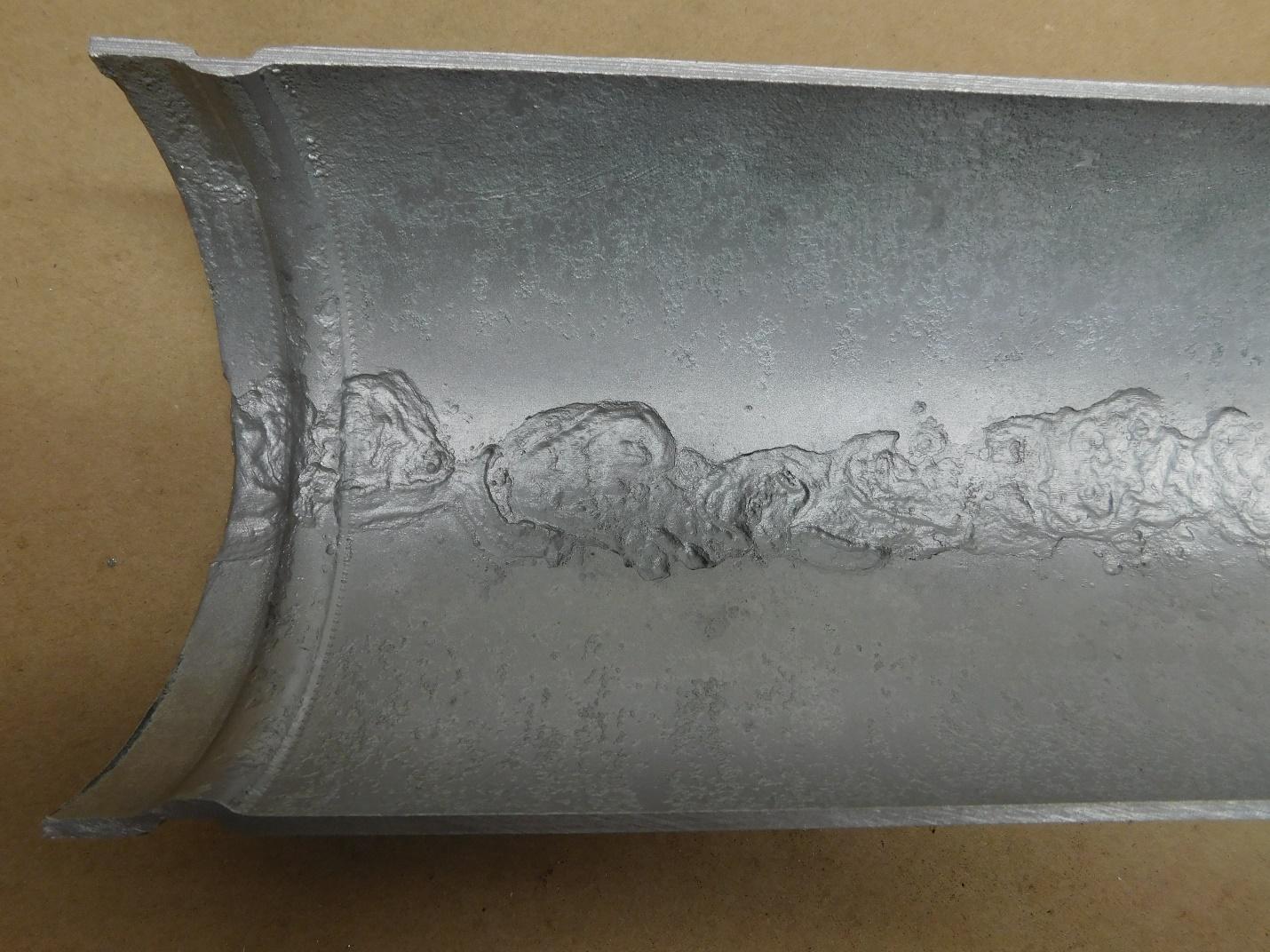 After media blasting, the highly localized metal loss can be observed underneath the iron oxide tubercles.

The highly localized nature of this corrosion can result in the rapid development of leaks, with failure having been reported in as little as 12-18 months after initial installation. The expected service life of black steel piping in dry and pre-action systems is significantly longer due to the metal loss being more uniform and spread out across any wetted metal. This is not to say black steel systems are immune to corrosion. Failures will still ultimately occur, and due to the more widespread nature of the metal loss, a significant amount of iron oxide deposits are formed, significantly increasing the chance of a system obstruction, preventing adequate discharge in the event of a fire.

Ultimately, the optimum approach to extending the useful service life of your dry and pre-action fire sprinkler piping whether existing or new, black steel or galvanized, is to remove the corrosive element of oxygen. Learn more about our nitrogen inerting technology, which effectively removes oxygen within dry and wet pipe fire sprinkler systems.