What is a Nitrogen Generator?

But what is a nitrogen generator?

What a Nitrogen Generator Does

A nitrogen membrane separator contains thousands of hollow fibers constructed of a porous membrane material. This membrane material can take a feed stream of compressed air and separate nitrogen from other gases such as oxygen, carbon dioxide, and water vapor based on molecular size.

Using nitrogen as the source of supervisory gas in a dry pipe or pre-action fire sprinkler system eliminates corrosion due to the lack of oxygen to support the corrosion reaction. The use of nitrogen as a supervisory gas has been approved by NFPA 13 (Section 7.2.6.1) and FM Global Data Sheet 2-1: Corrosion in Automatic Sprinkler Systems (Section 3.2, April 2018).

A nitrogen generator eliminates corrosion in a dry or pre-action fire sprinkler system compared to using an air compressor as the source of supervisory gas.

Every dry pipe fire sprinkler system requires compressed gas to function. The compressed gas serves two purposes. First, it provides the necessary force to keep the water held back at the dry valve. Second, it provides verification of the integrity of the pipe network. Traditionally this compressed gas has been supplied by an air compressor and regulated by the Air Maintenance Device (AMD).

NFPA 13: Standard for the Installation of Sprinkler Systems regulates the requirements by which an air compressor serving a dry or pre-action fire sprinkler system must perform. Previous editions of NFPA 13 as well as the current 2016 edition require that the compressed air supply shall be from a source available at all times (Section 7.2.6.3.1, 2016) and the air supply shall have a capacity capable of restoring normal air pressure within 30 minutes (Section 7.2.6.3.2, 2016) or 60 minutes in refrigerated spaces maintained below 5⁰F (Section 7.2.6.3.3, 2016).

From a corrosion standpoint there is a systemic issue with using air compressors as a source of supervisory gas: they continually provide a source of oxygen to the system that will sustain the corrosion reaction.

As leaks develop, the air compressor runs more frequently to maintain the required supervisory pressure which results in more oxygen being introduced to the pipe network. This additional oxygen increases the amount of corrosion taking place and accelerates the leak frequency of the sprinkler system. Replacing compressed air with nitrogen will break the corrosion cycle and prevent leaks from occurring.

By using a nitrogen generator in conjunction with a vent to purge the pipe network of the corrosive oxygen gas, corrosion in the system could be effectively stopped. Immediately, ECS launched a nitrogen-based corrosion control system and began to sell a line of nitrogen generators for fire protection.

The largest ECS nitrogen generator is floor mounted with the ability to provide nitrogen for up to 22,500 gallons of sprinkler volume while the associated stand-alone compressor will meet the NFPA 13 fill requirement for 2,025 gallons at 40 psig. By design, the only maintenance required for the nitrogen generator is an annual filter change. 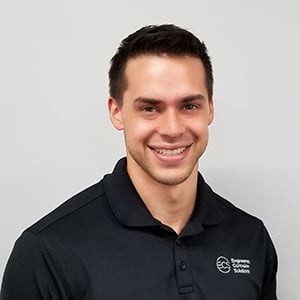