Should You Repair or Replace a Damaged Fire Sprinkler System?

The first several leaks are often just repaired, but once they become enough of a nuisance or expense the owner will look to their fire sprinkler contractor for a solution to the problem. More often than not, the contractor will recommend complete system replacement. However, this does not take into consideration the highly localized nature of corrosion in fire sprinkler systems and results in the significant expense of replacing pipe, much of which may still be in excellent condition.

Surgical replacement of the most damaged piping, followed by the implementation of a corrosion control strategy, is often a much more cost-effective approach to stopping future leaks. 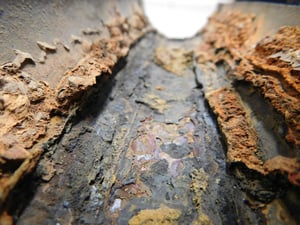 The primary type of corrosion in water-based fire sprinkler systems is oxygen corrosion. Oxygen corrosion requires three components to occur: an electrolyte (liquid water), oxygen, and metal in contact with the water (most often iron and zinc in this industry).

These three elements are only abundantly present in certain locations in a given type of system, with the remainder of the system piping experiencing only minor corrosion rates.

Here are some characteristics of corrosion in wet and dry pipe systems:

Keeping the corrosion characteristics of each type system in mind, we can begin to determine what pipe has experienced the most severe corrosion (and may need to be replaced) with a walk-through of the facility and by identifying where leaks have previously occurred. In mission-critical environments, where leaks cannot be tolerated, it's often necessary to gather hard data on the condition of the system piping before making a decision on a path forward.

In a Corrosion Assessment, an ECS Engineer, along with a local fire sprinkler contractor, performs an on-site internal investigation to determine the location and severity of corrosion throughout the system piping. The assessment includes:

Interested in a Corrosion Assessment for your own facility? Get a quote now:

Our pipe analysis provides quantified data on the amount of metal loss that has occurred when video scoping is not needed.

Ready for your own Pipe Sample Analysis? Find out how to submit a sample:

With hard data on the severity of metal loss that has occurred in a given system, the building owner is equipped to make informed decisions on what the most cost-effective approach is to mitigate the damage that has occurred.

Regardless of how much pipe is replaced, if any, ECS always recommends the implementation of a nitrogen-based corrosion control strategy to prevent further oxygen corrosion damage from taking place. By removing oxygen from the system before it can cause corrosion, and preventing its re-entry, the service life of an existing system can be significantly extended.

Our team of experts is always available to help you devise and implement a corrosion control strategy. Contact us today.