What is the Life Expectancy of Galvanized Pipe?

For many years galvanized steel has been the preferred construction material for dry and pre-action fire sprinkler systems. Despite the added cost of using galvanized pipe in lieu of black steel pipe (typically a 30% premium), galvanized pipe was often specified for projects based on one primary assumption: that it provided better corrosion management and prevention, and would thereby result in an extended service life for the system.

However, feedback from installing contractors and building owners has shown that this assumption was wrong, and that galvanized pipe may have been a misapplication of material selection.

FM Global has stated that in the presence of trapped water, galvanized pipe can experience failures in 2-3 years after installation (FM Global Property Loss Prevention Data Sheet 2-1 “Corrosion in Automatic Sprinkler Systems” October 2017). ECS has seen failures develop in as little as 12 months, with most systems developing failures within 5 years after install.

So why does galvanized steel fail so quickly in the fire sprinkler industry?

Simply put, the passivating layer of zinc carbonate does not form when the zinc layer doesn't have a chance to dry. 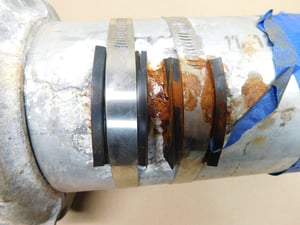 Despite the name, dry pipe fire sprinkler systems will always contain some amount of trapped water. No matter how well a system is pitched to drain, it is impossible to remove all the water that is introduced to dry and pre-action systems during hydrostatic testing and periodic trip testing.

At the locations where trapped water is present, the protective zinc carbonate layer will not form. Rather, under consistently oxygenated and moist conditions, aggressive localized oxygen corrosion will dissolve the zinc layer and expose the underlying steel.

The highly localized metal loss seen in galvanized pipe is not typically seen in black steel piping. Black steel pipe in dry pipe systems experiences generalized metal loss and wall-thinning at any location where trapped water is present. While this corrosion can result in large amounts of iron oxides, it does not result in highly localized pitting and rapid development of leaks.


In black steel dry and pre-action systems, leaks typically do not develop until 15-20 years after initial installation. However, obstruction risk from the formation of iron oxides occurs well before leaks begin to develop.

Despite increasing awareness amongst installing contractors, specifying engineers, and governing bodies, galvanized pipe continues to be installed in some new dry and pre-action systems. In order to extend the useful service life of these systems, it is essential that a corrosion control strategy be deployed before significant damage occurs. Since it is nearly impossible to remove the trapped water from these systems, the only method to effectively prevent corrosion in these systems is to remove the corrosive specie, oxygen.

Our Approach to DPNI Technology

ECS has developed Dry Pipe Nitrogen Inerting (DPNI) technology to quickly remove oxygen from inside a sprinkler system and prevent its re-entry, mitigating the risk of corrosion. For more information on the technology, read our guide to ECS nitrogen generators and venting devices below.