How to Evaluate Corrosivity in Fire Sprinkler Piping: Going Beyond NFPA 25

The 2017 edition of NFPA 25: Standard for Inspection, Testing, and Maintenance of Water-Based Fire Protection Systems includes sixteen (16) chapters that describe the mandatory minimum requirements for Inspection, Testing, and Maintenance (ITM) of water-based fire sprinkler systems. In addition to the mandatory requirements, the standard also includes eight (8) non-mandatory annexes providing additional information and suggestions on best practices when applying the standard.

The intent of NFPA 25 is to help property owners ensure the operational integrity of their sprinkler system in the event of a fire. However, by attempting to minimize the burden of intrusive testing, the code requirements do not adequately identify the risks of corrosion and obstructions in a fire sprinkler system.

The 2017 Edition of NFPA 25 Chapter 14 and its associated annexes have three main weak points, summarized below:

Let's take a closer look at each weakness.

It is now known that corrosion in water based fire sprinkler systems, and the resultant deposits formed in the piping network, is typically very localized. Random selection of minimal inspection points is highly likely to miss those locations where corrosion is occurring and fail to identify future leak and obstruction risks. Rather, investigation should focus on those areas where the most severe corrosion occurs. 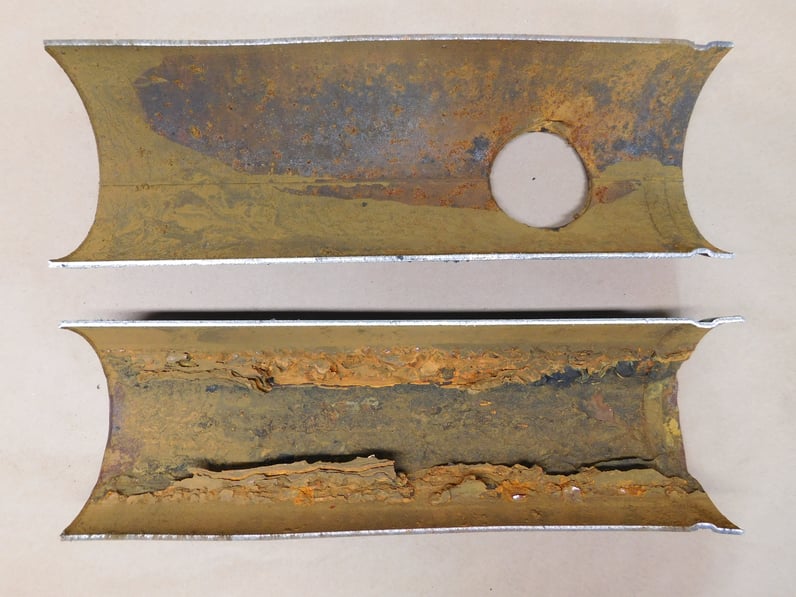 In wet pipe systems this is the high point(s) of the system, typically the branch lines, where trapped air accumulates. In dry, preaction, and deluge systems, the most severe corrosion occurs in the low points, typically the mains, where trapped water collects. Review of the system as-builts and a site walkthrough can quickly identify potential locations for investigation that provide a much more representative picture of the system condition than visually inspecting one (1) main end cap and one (1) branch line or sprinkler.

2. Water Sample Testing as an Alternative to Internal Inspection

The annex provides several alternative testing methods that can be used instead of an internal inspection of the piping. One of those methods is laboratory analysis of water and solid materials collected from the system for the presence of bacteria that can influence corrosion. While Microbiologically Influenced Corrosion (MIC) is heavily referenced in this section of NFPA 25, as well as many trade publications in the past, the corrosion directly attributable to MIC makes up a very small portion of the corrosion failures that occur in fire sprinkler systems. In the FM Global Data Sheet 2-1 Corrosion in Automatic Sprinkler Systems (October 2016), FM Global makes takes a firm stance regarding MIC"

“Microorganisms are ubiquitous, but detecting MIC-related bacteria in sprinkler water and/or corrosion product samples does not necessarily confirm that MIC has occurred in a fire protection system… In many cases, the presence of MIC-related bacteria may exert some influence on corrosion in fire protection systems, but not as a major contributor.”

The data that ECS has gathered from analyzing thousands of water and pipe samples from fire sprinkler systems correlates strongly with FM Global’s viewpoint. While nearly every water sample analyzed will contain some MIC-related bacteria, there is no correlation between the presence of these bacteria and the severity of the corrosion that has occurred. Simply put, performing water testing to look for bacteria is a waste of time and money and provides little to no usable data to quantify the current condition of a fire sprinkler system.

3. Ultrasonic Testing as an Alternative to Internal Inspection

The effectiveness of using ultrasonic testing methods to accurately identify the highly localized corrosion typically found in sprinkler systems, and its ability to reliably quantify the severity of the metal loss, is questionable.

There are several key reasons why the use of ultrasonic testing alone will not provide sufficient data to accurately define the risk posed by corrosion in the fire sprinkler industry:

For these reasons, ECS believes that ultrasonic testing is more likely to provide a false sense of security to the building owner by failing to accurately identify the level of risk posed by the internal corrosion of a fire sprinkler system.

One of ECS’s service offerings is the Corrosion Assessment of fire sprinkler systems. While these assessments are often performed on sprinkler systems after they start developing leaks to determine the location and severity of corrosion in the fire sprinkler piping, the inspection methodology can easily be applied to the internal investigations described in Chapter 14 of NFPA 25. 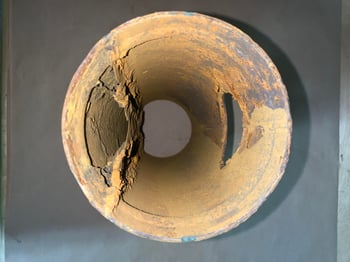 There are three (3) primary investigative tools that are used during these inspections:

A full Corrosion Assessment can be a time consuming and expensive exercise and may not be the most cost effective approach to meeting the requirement of NFPA 25. However, aspects of the assessment process can be applied to a typical NFPA 25 five-year investigation to provide profoundly more beneficial information while still minimizing the burden placed on the building owner.

If you're interested in learning more about our Corrosion Assessment, download the brochure below or get in touch with us directly.