How Corrosion Occurs in the Fire Sprinkler System Riser

Oxygen corrosion is the primary and predominant source of metal loss in wet pipe fire sprinkler systems. The most common location for this corrosion, and resultant leaks, is at the high points of the wet pipe system where trapped air accumulates. Pockets of trapped air act as reservoirs of corrosive oxygen, which will continue to dissolve into adjacent water and drive the corrosion reaction until all the oxygen is consumed.

However, there is another location on a wet pipe system that sees corrosion related failures that is not addressed as frequently: the system riser.

Sources of Corrosion on the Riser

Most system risers are completely vertical sections of pipe, along with necessary control valves and drain connections, so trapped air would not be expected to accumulate at this location. However, based on numerous pipe samples that have been submitted for analysis (most with pin hole leaks), oxygen corrosion was still found to be occurring at the system riser.

Based on the submitted samples, two primary sources of corrosion were found to be occurring: trapped air was accumulating beneath the riser check valve, and general oxygen corrosion was occurring in systems that see frequent high-volume flow of fresh water. 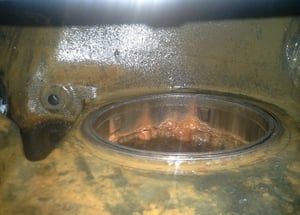 Many wet system risers include a check valve that maintains system pressure, even with fluctuations in the water supply pressure. However, it is common for the pressure in the overhead piping above the riser check valve to increase to a level above the supply pressure within the fire water delivery piping. This generally occurs because of temperature increases in the overhead piping associated with the heating of the day and air that is always warmer against the ceiling. 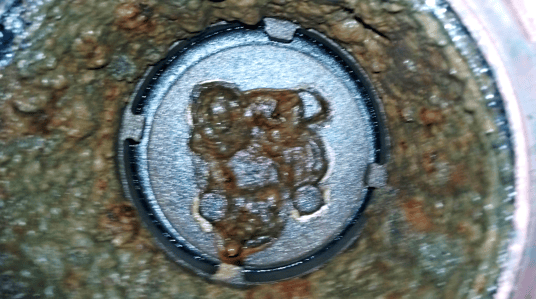 The simplest way of preventing corrosion due to air accumulation under the check valve is the installation of an automatic air vent on one of the ports typically included on the check valve. This vent would automatically eject any air that accumulates before corrosion has time to occur.

Another common point of failure is the bulk supply piping, including the riser, of systems that see frequent, high volume flow of fresh water. Examples include the following: 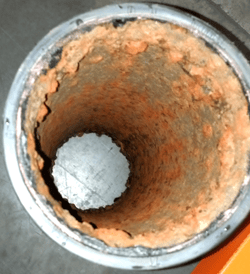 Dissolved oxygen in the source water, which constitutes a small fraction of the oxygen available for corrosion in a wet pipe system, can still result in cumulative corrosion in piping that sees frequent, high volume flow. The piping downstream of fire pumps experiences the highest frequency of leaks, suggesting that these pumps may act to entrain additional oxygen into the water.

The point of failure on riser piping is often located at the weld seam. Because corrosion occurs on the entire inner surface of the pipe, the longitudinal weld seam is always exposed to a corrosive environment. Fire sprinkler piping is rarely heat-treated, resulting in preferential corrosion of the weld seam.