With an average of one corrosion-related leak every two weeks in 2014, this mall had a high risk of damaging tenant goods and interfering with business operations.

The root cause for corrosion within the systems was oxygen attack of the black steel piping. The majority of leaks have occurred at the air/water interface in the branch line piping over the tenant spaces. The unique
characteristics of mall operations result in frequent tenant space modifications and build‐outs. The high frequency of system draining events causes frequent introduction of fresh air into the system piping, resulting in extremely high localized corrosion rates.

To mitigate the risk of oxygen corrosion in the wet pipe systems serving the mall, it was determined that the ECS Wet Pipe Nitrogen Inerting (WPNI) protocol be implemented to remove oxygen from the system piping and prevent its re‐entry. The mall opted not to replace any damaged piping, but rather implement the corrosion control strategy and replace pipe in the future on an as‐needed basis. The ECS equipment installed to facilitate the WPNI protocols includes the following: 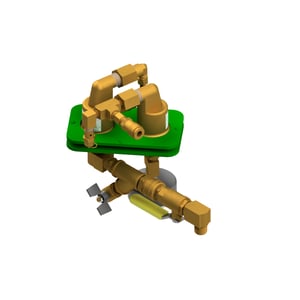 After installation of the ECS WPNI equipment and the nitrogen supply line to each sprinkler riser room, ECS and the local fire sprinkler contractor began inerting the individual wet pipe fire sprinkler systems the week of September 11th, 2016. The inerting of all systems was completed by the end of the month.

Approximately 10 months after the inerting was completed, the mall operations manager stated that there has been a drastic reduction in leaks on the damaged thin wall piping of the 54 fire sprinkler systems, despite no pipe replacement having been performed. The operations manager noted that the drastic reduction in fire sprinkler leaks has allowed mall maintenance personnel to spend time on other important facility. 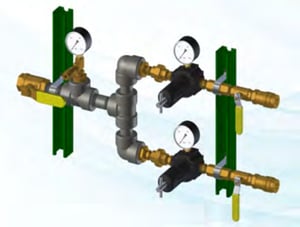